Canada - A Place for Prosperity and Warmth 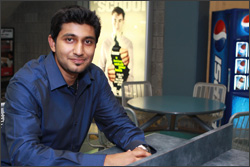 Education marketers tell us Canada is involved in a four-way battle for international students along with Australia, the United Kingdom and the United States - and the good news is Canada may be gaining the upper hand.

By way of evidence, there's Vinodan Senthinathan, an engaging 21-year-old international student from Bahrain who chose Canada over the other major English-language education destinations - and for good reason.

"The U.S. doesn't give international students much opportunity to work there. It's not impossible, but it is difficult to obtain permission," he says, adding that rising racial tensions in Australia and Britain have made Canada a relative oasis of tolerance and peace.

Born in Bahrain to parents originally from Sri Lanka, Vinodan attended private school in the tiny kingdom of 33 islands in the Persian Gulf. Like all children of foreign nationals there, he did not have Bahraini citizenship and could not go to a public school.

Vinodan had always known he would be studying business, but how would he choose from the plethora of business programs and specialties available today? He spoke to his Canadian relatives about schooling options, and it was then that he learned about the distinction between college and university.

"College and university are not distinguished in Bahrain; the two terms are used interchangeably to describe post-secondary education," says Vinodan. He learned that Canadians colleges offered programs that were more career-oriented, and the courses involved more hands-on instruction than university-style lectures.

"I knew I was better off doing practical work in class. I had discovered that when I was taking the Indian curriculum, which was very theoretical. I was much more at home with the British teaching model, which involves more laboratory work," he explains.

Once he had decided to settle for college over university, it then became a matter of selecting one among the six big public colleges that serve the Toronto area.

"I had to choose something close to my relatives' home in Markham, so it came down to Centennial College and one other. I liked the way Centennial approached me and offered to help me - especially the staff in the International department. I really felt welcome."

Vinodan landed in Toronto in April 2007 and immediately prepared for college. The culture shock did not catch him by surprise. Instead, he embraced the multiculturalism that surrounded him in Markham and Toronto.

"Canada does have a reputation for welcoming the world here, and more and more people are interested in coming to Canada."

Vinodan enrolled in Centennial's popular three-year Business Administration program, which appealed to his penchant for practicality.

"My plan was to enroll in a general business program and get a little bit of everything: marketing, human resources, operations management skills, so that I would gain business knowledge in a more rounded way," he says.

Vinodan had the option of pursuing a co-op education option, which amounts to three semesters set aside for paid work experience in his field. He opted for it, choosing to spend his co-op work terms on campus working for the college itself.

"I ended up working in the Health Science department. They kept giving me more and more work, such as software problems and pilot projects. As I completed each, I was given more challenging assignments. It was all very educational."

In addition to his co-op work, Vinodan had opportunities to work on campus as a tutor and as a staff member in the Student Centre, all paid positions that provided much-needed funds. He discovered he was in his element at college.

"The best aspects of Centennial are the small classes and the instructors. They all have some industry experience and help us prepare for the future job market by explaining the business trends and what is coming next in the field," he says.

Vinodan has spoken to friends who went to university and learned they have very little grading beyond the all-important mid-term and final exams.

"Only 10 to 20 per cent of the university grade is based on practical work and case studies, whereas much more of my college grade is derived from day-to-day assignments."

Vinodan has acquired a grade point average (GPA) of 4.399 - very close to a perfect score of 4.5. His lofty grades earned him the Johnson Insurance Scholarship last fall, awarded to the Centennial student with the highest cumulative grade point average in the Business Administration program.

On June 18, he will cross the Centennial College convocation stage to receive his three-year advanced diploma before his peers and professors. Vinodan hopes to start a management training program at one of Canada's big banks (he's applied to them all) and pursue any growth opportunities that come his way.

At the same time, he is keen to continue his education with a university degree in human resources. Because many of his college courses will be counted for credit, Vinodan needs only two years and one semester to earn his bachelor's degree.

"I've had very insightful professors who taught human resources at Centennial. I like the statistics and calculations involved in keeping good HR numbers and measuring performance," he explains. "I'm also very approachable and friendly - good traits to have when you work with people."

It's no secret, then, that Vinodan would ultimately like to have a career in human resource management. For this energetic and positive-minded international student, it appears to be entirely within his grasp.

Jason writes here about international students and their feelings on Canada. They find this country as a place for prosperity and good scope for their careers. International business school, of Canada produces students to get a strong foothold in the job market. Students of International Business College, and business management program prove to be the ready materials.

For more information about Centennial's School of Business programs, visit www.centennialcollege.ca/business.
Powered by