Students Back To School At Canadian College For More! 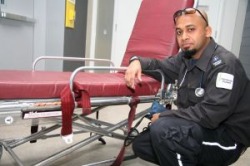 Abdullah Muhaseen has an academic pedigree that would be the envy of many. He graduated from one of Canada's top universities, earning bachelor's degrees in both neuroscience and psychology.

A professional career in medical research or graduate studies seemed to be in his future, but Mr. Muhaseen choose a different path: He enrolled in a public college to become a paramedic.

The University of Toronto graduate is part of a growing trend in Canadian higher education. Driven in part by the slouching job market, the country's colleges are seeing a rise in applications from people who have already received degrees from leading universities.

Public colleges in Canada offer a variety of vocational programs, including one- and two-year courses similar to what U.S. community colleges provide.

While the Canadian college tends to lack the resources and amenities university graduates are used to, they are opening the door to steady work. At Centennial College, Mr. Muhaseen's second alma mater, officials say more than 90 percent of graduates get hired within six months of completing its programs. Other Canadian colleges boast similar successes.

"All of our colleges work very closely with business and industry so we know what's needed and how many jobs," said Rick Miner, president emeritus of Toronto's Seneca College, one of the country's largest colleges. During his eight-year tenure, which ended in 2009, he said enrollment of "postgraduate students"—the term Canadians use for those who have earned university degrees—increased at a steady rate, eventually making up 15 percent of the full-time student body and 50 percent of the part-time population.

"The colleges have become kind of a finishing school for university graduates," he said.

It's unclear exactly how many of the country's 1.5 million college students have university degrees.

"Nationally, the number of university graduates in colleges is difficult to quantify, but we hear about this all the time because they're looking for advanced skills and training they can take to the job market," said James Knight, chief executive of the Association of Canadian community colleges, whose son also went to college after getting his university degree.

A Practical Approach
The trend, of course, hinges on a perception that a university bachelor's degree is not as valuable as it once was, at least in terms of finding work.

"A university degree used to be an entree to a job. [Employers] didn't care if your degree was in archaeology—they'd take you into the accounting firm and train you for the job," said Ann Buller, president of Centennial, in Toronto. "Their university degree means they have a good, solid education but not necessarily something that translates easily into a job. We can help them discover their passion."

"I love my job. No two days are the same, and it fits my lifestyle," he said about becoming a paramedic. Mr. Muhaseen graduated last year from Centennial College and now works in busy downtown Toronto.He said he enjoyed the rigor of his college programs.

"In university you can slack off and still get by. Oftentimes you tend to forget a lot of what you learned in an elective course, but not with this program," he said. "Every day you have to be on top of your game." Other university graduates agreed, saying they liked the more practical education at colleges.

"University is more theory and not a good preparation to finding a job today. The college experience excels at that," said Denise Marshall. Ms. Marshall, who earned a four-year degree in commerce from Concordia University, in Montreal, lost her job during the recent economic upheaval. But she found a new career after deciding to study technical writing at Seneca College.

She now works at Research in Motion, the makers of the BlackBerry. She said she looked for technical-writing courses at various universities, but they were often a small part of an English degree.

Beth Agnew, the technical-writing program coordinator at Seneca, said midcareer changers like Ms. Marshall are common in her program, but even more so are people with newly minted degrees and little job experience.

"Most applicants to our technical communication program are fresh out of university," she said. "They're often looking for ways to differentiate themselves from hundreds of others. We find the degree opens minds, but the college course lights the fire within."

A New Student Body
The increasing number of university graduates at colleges is causing administrators to rethink how they serve students.

"Right now we have 25 postgrad programs where you need a degree or diploma to get in, and it's our fastest-growing sector. Out of 14,000 full-time students, about a thousand are in postgrad programs," said Ms. Buller, the college's president.

Still, colleges do have to be somewhat cautious when catering to postgraduates. The students often have higher expectations about the services or amenities they may receive, and they have different needs, Ms. Buller said.

"The way you treat and deal with these students is radically different," she said.For instance, university graduates aren't necessarily interested in playing varsity sports, but they want to know about library access and the availability of tutoring services.

For the future, Ms. Buller predicts more Canadians will hold a university degree and have studied at a college to train in a specialized field. She said today's high-school graduates are more accepting of the idea because many of their parents went back to college.

She said she says to them: "You might not come to Centennial in the fall, but we might see you in five years."